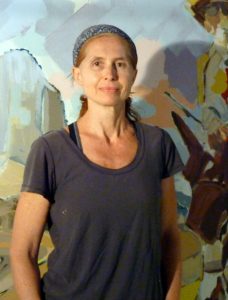 I studied painting, drawing, and sculpture at the University of Kansas in the early 1990’s, in the state where I grew up.  After moving to Colorado, I began drawing the outdoors on small pieces of paper when I was out bicycling or hiking.  Later, after moving back to Kansas for a time, I began drawing  inmate portraits at a county jail where I was volunteering. These quick portraits further developed my loose and gestural approach to my work that I had been using with plein air.

When I moved to Southern California in 2008, I began focusing on “common and everyday” scenes of life such as traffic, buildings, sign boards, and incorporated these subjects into my repertoire of landscape and portrait drawing.

Currently, I am most interested in drawing and painting the people and places where I live, here in Apache Junction, including the mountains, rodeos, restaurants, cars, bull riders, spectators, actors, horses.

My early influences included the French illustrator Honore Daumier, the portrait painter Alice Neel, the sculptor Henry Moore, and Abstract Expressionism in general.  As of late, and largely due to living in the Southwest, I have looked to the painting of Frederic Remington, Charles Russell, and Edgar Payne. The presence of street art and murals in the Phoenix and Mesa areas have inspired me and offered opportunities to do larger-scale public painting.